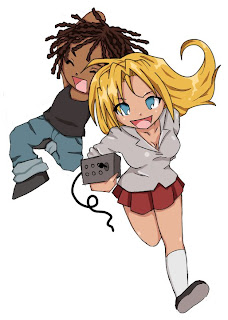 Anyway! I've decided/been given permission/been encouraged to cosplay Karin, Kin-Yoobi Con's new female mascot (pictured left). I haven't been given much information on her, other than she's our old/current male mascot's girlfriend, and she clearly likes video games. Anyway, I originally just wanted to cosplay her at Kin-Yoobi and for a promotional photoshoot, but now I've decided to cosplay her at pretty much all of the GameZone Recreation events. Essentially, I'm hoping it'll be good promotion. Plus, it looks relatively comfortable, compared to most of my other cosplays (with the exception of Clyde).

All I really need for her are better socks and a red skirt. The rest I have, except I'm using a dress shirt instead of a polo, 'cause I honestly thought that she was supposed to be wearing a button-down, I don't know why, and I don't feel like going out and buying more than I need to for this. I already had to take in the shirt that I have, and that was a lot of work. Needs to be ironed more, but it is really hard to iron darts without a ham.

Anime Storm is tomorrow! A little event that GZR is hosting, so I'll be cosplaying Karin, but with a black skirt and thigh-high socks instead of knee-high, because that's what I have right now.
at 3:59 PM
Email ThisBlogThis!Share to TwitterShare to FacebookShare to Pinterest