the dance performance that I mentioned in my last post is over, so hopefully I'll be able to work on cosplay more.

I decided that to cut costs even further for my Koffing cosplay, I'm going to use an old pair of jeans that already have a hole in the knee. I'll have to figure out a way to stop any holes from ripping further during wear too, but I guess that's later. I'm really looking forward to destroying a pair of jeans though. It sounds like it's going to be a lot of fun!

Here's a good tutorial that I found on distressing jeans, if anyone's interested. 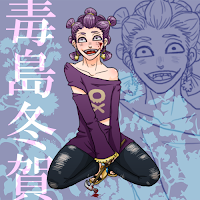 I'm not going to use all of the techniques in that video, I'm mostly looking at ripping holes, the thing with the sandpaper, and bleaching. I'm also not getting a wig for this, even though I found some really nice ones for $10. Instead, thanks to the brilliant mind of my friend FoxBerry, I'll be making a hat. I've already figured out how to do it, save for a detail or two, and I believe I already have the fabric. The real bonus here (other than saving money on a wig) is that once I figure out exactly how to make it, I can *gasp* sell them! Though none that I make will ever be as good as the first one, that's just how it is.

I also found this picture of a Weezing gijinka that I was really attached to until I found the Koffing one. It's so adorable, and I had been thinking of a way to cosplay Weezing, though I'm not sure why, but it didn't stick in my head as well as the Koffing one did. In any case, it makes me want to have a little bomb prop. Though that's more time and money that I may not have. However if someone wanted to cosplay this when I cosplay Koffing, I might just love them forever. I'm just saying.

My boyfriend's and my panel, Magikarp: A History has gotten it's finalized time of 7:00pm on Sunday. You can RSVP on the facebook event here if you like, as well as get more details about the panel.

In addition to doing that, I applied to be a model for a "Mystery Designer" at Fanime. I don't know if I'll go through with it, since it'll take up Friday evening and Saturday morning and early afternoon, which would make me miss the Pokemon gathering, and I've had some pretty bad experiences with "random" designers, so we'll see what I think of this designer if/when I get chosen and meet them.
at 10:51 PM
Email ThisBlogThis!Share to TwitterShare to FacebookShare to Pinterest