I'm trying ridiculously hard not to procrastinate on my Yoko cosplay, because I'm with a group, and I don't want to let anyone down. Also, I have to plan for the convention itself still. It's a little stressful, to be honest, which I think makes me work on things less, but I am getting things done on both fronts. 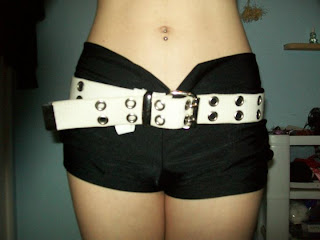 A friend hosted a meet at her house where I got some stuff done. Then I finished my shorts at home. I really hate those things. They look alright, but they were so hard to make, and I still don't think they're perfect, so I hate them. I still need to get the right belt, which at this rate, I'm not going to find.

I also made as much of the bikini as I could with the materials that I have, which wasn't much. I cut out the main breast pieces and cut and sewed the top strings (the ones that go behind the neck). I didn't cut and sew the bottom string because it's red, and unfortunately, I don't have the red fabric that I need. My friend that hosted the meet got the same fabric for the cape (in red), but I forgot to take the scraps on Saturday, so I can't do anything.

I also cut out the cardboard pieces for Yoko's communicator. I can't finish it because I don't have the vinyl to cover it. I would probably have it if JoAnn's carried it in orange. Dunno where I'm gonna get that now, I can't even find it online.

Finally yesterday, my boyfriend ordered the fabric for my jacket and the iron-on vinyl for all the details on things, because I'm really now on cash. After I sell some hats at Kin-Yoobi, I'm going to pay him back, but I really am ridiculously grateful. Now I just hope I have enough to cover the rest of the vinyl and the zippers that I need.
at 11:44 PM
Email ThisBlogThis!Share to TwitterShare to FacebookShare to Pinterest