I wore a cosplay of time-skip Yoko from Tengan Toppa Gurren Lagann to Kin-Yoobi Con. While the cosplay is not 100% finished, I was quite happy with it. I was initially worried that security would tell me that it was too revealing and ask me to change, so I did have a backup, but luckily there were no issues. I did doubt that they would ask, since I was properly covered and taped in, but it didn't hurt to have a backup.

On Day 1, I woke up freezing cold and thinking "There's no was I'm going to wear a bikini today!" So I dressed in my backup cosplay, an alternate version of Yoko (from Episode 5) with a robe, which I made to come down to my knees. Under it, I wore a pair of comfortable black shorts and a black tank top. Once I got into the main hall of the convention, I immediately thought "Oh, I am most definitely wearing a bikini today." I couldn't believe how hot it was in there! My mom was coming by later to watch my Artists' Alley booth while my boyfriend and hosted a panel (the two friends that I had watching my booth wanted to see the panel), so I called my mom and asked her to bring the rest of my cosplay things.

I took off the robe while I was setting up my booth and changed immediately after the panel.

Throughout the first day, the red "zippers" on my boots kept coming apart (the Velcro holding them on was hot-glued on). Luckily I brought my hot glue gun with me, but by the end of the day, I was out of hot glue! The zipper on the left shoe came apart almost completely, from my ankle (exposing the black boot I used as a base) to just above my knee. I had no hot glue to fix it, but all I had left to do at that point was sit behind my booth and then pack up and leave. The sole of my shoe kept coming off too (and it got all scuffed up), but I just hot glued that back on a couple of times and picked up my feet more when I walked, and it stayed on.

That night, I sewed the Velcro to the boot, which helped immensely the next day.

I had a little bit of difficulty taping myself into my top both days. Since I was sick, I got really nauseous when I looked down, and the tape is ridiculously hard to put on. You have to stick it to your skin, then peel off the paper layer over it and attach it to your clothing. It was the second step that gave me trouble. I was really in a hurry on Day 1, changing in the bathroom with my friend in the stall with me to help, so I only got four pieces on (two on the bottom and one on each side). On Day 2, I got sick in the morning (early onset of Con Plague, I believe), so I slept in and then took my time getting ready, so I managed to get all 6 pieces on where I wanted them.

My belt first off wasn't accurate, I didn't have time to make the one that I wanted. Also, it didn't stay where I wanted it to. As I said, I intended to make an accurate belt, and I was waiting until then to put belt loops on the shorts to keep it where I wanted. However, without the accurate belt, I never attached the loops, so the belt that I had didn't stay where I wanted it. Ah well. The shorts also didn't entirely do what I wanted them to, but they made my butt look good, so I won't complain.

My jacket fit a little odd, but it was really hard to tell with all of that hair in the way. The iron-on details began peeling off at some point too, hopefully I can just iron those back on more carefully and they'll stay. If not, there's always hot glue! (I hate that this costume is so dependent on hot glue though.) The hidden pocket that I made for my cell phone was a little big, and my phone fell out of it several times, which I now blame for the phone's weak vibrating tone (it sounds sickly).

The wig was very heavy, I had to wear the ponytail over my shoulder the entire time, and the wig still slid backward all the time. I need more bobby pins, I think. I also recently read up on the best ways to secure a heavy wig, so I'm going to try those as well. Toward the end of Day 1, I actually ended up buying pain killers from a vending machine because the weight of the wig made my neck hurt so badly. I secured it better on Day 2, I still had to readjust it once, but I didn't end up with a head/neck-ache at least.

It was also a bit of a pain to keep constantly combing the wig out. I was advised to comb it with a wide-toothed comb every hour, which I tried to do, but by the end of Day 1, it was a mess. When I got home that night, I brushed it and was half-way finished when it fell off of the table and sent me back to Square One. Apparently my cursing and angrily throwing the comb down scared my friends a bit. I really need to get silicone spray, and I also now keep all of my long wigs in loose braids, because it's just too frustrating to have to comb them out constantly. 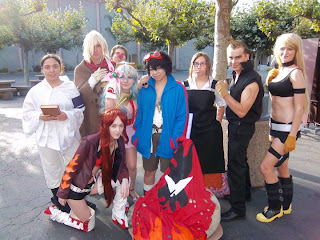 Around 4:30pm on Day 2, the rest of my TTGL group showed up for the cosplay contest. I think they all looked fantastic, and I'm so proud of what little work I did to help with the prop (appropriately named "Dead Kamina"). They took Best In Show in the cosplay contest, though I couldn't compete because I was Emcee. (I'd like to take a minute here to clarify that, yes, these are my good friends, and yes, I'm staff and Emcee of the cosplay contest, but I am not a judge, and I did not talk with any of the judges about contestants at any point of the day.) I wish that they could have been there for more time, or at least that I could have spent more time with them, but it was a very busy day.

At the end of the weekend, Yoko came out a little worse-for-wear, but I more or less know what needs to be done before the next time I wear it.
at 12:59 AM
Email ThisBlogThis!Share to TwitterShare to FacebookShare to Pinterest