I realize I've been posting less and less, so here's what I've been up to!

First, my WiiFit Trainer cosplay is more or less finished. I would like to re-dye the pants, they should be darker, but I have plenty of time to do that. I think the next time I'll wear it will be Fanime 2014, so... Yeah, plenty of time.


My Animal Crossing Villager cosplay is still where it was last time I posted a photo of it. I'm avoiding doing sleeves. I did get a ton of little bug props for it though, so that's cool. 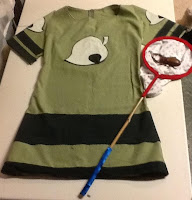 Also, my "secret" cosplay is on hold, so I'm not keeping it a secret anymore, it's Emmy from the "Professor Layton" series. I'm at a similar standstill with her, I don't want to do sleeves. I did a mock-up of her skirt-thing, and am in the process of doing a mock-up for the top but yeah, sleeves.


Also, I started another cosplay, so I technically have three and a half things I'm working on right now (the half being eventually re-dying WiiFit Trainer pants). Everyone's all into "The Last of Us" right now, and I'm no exception, except the gameplay is not my style. At all. Can't shoot. Can't be stealthy. No thank you. But the story is so good that I'm all wrapped up in a Let's Play of it on YouTube. Cosplays of it are already running rampant, I've seen quite a few Joels and Sarahs (still dying to see Clickers though), but I was drawn to a different character, sweet little Sarah.


The cosplay that I want to do of her is slightly spoiler-iffic (to anyone who hasn't watched the opening cutscene), so I'm not going to really explain, but there will be progress pictures. Currently, I'm trying to gather up everything I need for her, starting with that shirt. It's a band shirt of a band that doesn't exist (Halican Drops), so I've got to make it. I already bought a gray t-shirt (that's the easy part) and ordered some iron-on vinyl to make the print on it myself. I considered doing some at-home screen-printing methods, but they looked like they'd actually end up being more expensive than iron-on vinyl, because I don't have most of the stuff I'd need and it's over such a large area, and vinyl will get me almost the exact same effect. Plus, I already have experience working with iron-on vinyl, and I would have to learn an entirely new thing with at-home screen-printing. It's just simpler this way (for me at least).

I also have plans for the rest of her outfit, she wears purple pajama pants nearly identical to a blue pair that I already own, so I'm just going to dye mine purple. (Purple is my favorite color anyway, so now I'll just have purple PJs instead of blue ones, it's a win-win, basically.) Originally for a prop I was going to have Joel's watch, but it turns out I'll actually have a Joel with me who can wear the watch, so I instead I'm making the birthday card that Sarah got for Joel. (For those who played who might have missed it, it's an optional find in Sarah's room in the beginning, not in any cutscene.)

So yeah, the only thing I don't have plans for yet is the wig, which is frustrating because my hair is the same color but I don't feel like getting a haircut that will make me look like a 12-year-old. Also my hair is curly. And my bangs are pretty much permanently pink. Yeah. Wig time. I'm sure I'll find something that I can work with. I don't have much (any) experience cutting wigs, but I've paid attention when my friend has done it for me, and it's worth a shot. I'd really like to be able to do it on my own.

In any case I'm looking to debut Sarah (with Joel) at Sac Anime Winter 2014, along with potentially the "Magikarp: A History" panel. We keep saying we're done with that panel, but we just can't stop, so we're gonna try to take it to more conventions until it completely runs out of steam and we feel done.

On top of everything else, I'm trying to design and make more fleece hats to sell. I've actually been selling a few online recently just randomly here and there, and it's very motivating. Hopefully I can keep it up. I'm aiming to do a couple of craft fairs in November (maybe a few Artist Alleys at conventions too, depending on a bunch of stuff), so if you're interested, keep an eye on my hats Facebook page.

And finally, not sure if I ever included this in an actual post, but I made a Facebook page for my cosplay too. Like it for updates and stuff, or whatever people like cosplay pages for (I like them for updates and progress pictures)!
Gold Rose Cosplay
at 11:06 PM
Email ThisBlogThis!Share to TwitterShare to FacebookShare to Pinterest