I survived Fanime Con 2011! (Read my full review here.) My lack of updates is due primarily to trying to finish costumes in a panic. Unfortunately, I didn't finish everything on time, but it's didn't greatly impact the weekend. 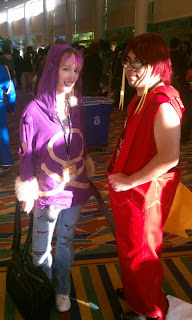 Koffing was finished on Day 0 of Fanime, most of the waiting was because my mom said she'd make part of it and then said that I didn't remind her in time, or something to that effect, so she finished it the day-of. Made it in time though. I ended up not getting a hammer for Koffing and opted for a grenade instead, both because a grenade was surprisingly easier to find, and I didn't feel like explaining the hammer to everyone who didn't understand it. My Koffing cosplay is ridiculously comfortable. It's so comfortable that I don't even care that I was only recognized about 10 times the whole weekend while my boyfriend was swarmed by photographers, because I was so comfy and he had to wear a wig and hop/shuffle around all day as Magikarp.

Magikarp was about 99% finished, I only didn't make the side fins/ears, which is probably why more than half of the people that saw him thought that he was a red Gyrados. Whoops. I'll make them before the next time that he wears it, though who knows when that will be. Also, the tail got really dirty from, well, just being on the ground. Luckily, the fabric we used was intended for outdoor furniture, so I should be able to scrub out the dirt and red tanbark gunk that got on it.

Fun fact, my sewing machine broke Wednesday night when I was finishing Magikarp, and I blame that for not finishing the ears. Luckily, my boyfriend's mom let me borrow hers to finish what I could. 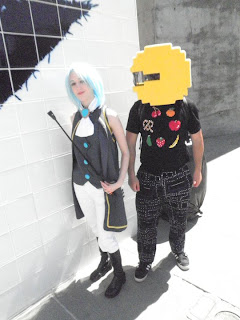 (Photo by Branden Kong) Pac-Man and Clyde were already finished, though I need to re-iron the letters on the back of the Pac-Man shirt, probably because my boyfriend always carries the Con Backpack, so the letters got worn off more than the Clyde ones on my shirt. I meant to do that before the convention, but never got to it, unfortunately.

Franziska von Karma still needs some major work, I need to completely remake the cravat (necktie thing), including the gem on it because it just doesn't work, and I always have to hot-glue it together while I'm wearing it or it just doesn't stay up right. I'd still like to get a color-accurate riding crop, but it's money that I just don't have right now. Speaking of the riding crop, a Fanime staffer (actually two of them) who didn't know what they were doing decided to zip-tie my riding crop to my belt loop, even though the forums (and other staff) say that they don't do that. I got it taken care of thanks to my buddy FoxBerry and her boyfriend. Also, my shoes for Franziska are just getting old. I'm considering taking them to the shoe repair shop in my local mall, but it's probably cheaper to get a new pair. And I sat in chocolate in my white Franziska pants. I washed them, but I haven't looked at them since, so I don't even know if it all came out. 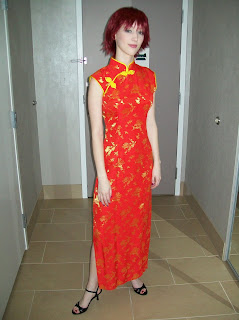 I didn't have a cosplay for the Black & White Ball this year, I just had a tradition Chinese dress, and I put on the Magikarp wig because my hair was bleh. I'm actually considering gettng my hair cut like the wig now though, I think it looked cute! I found out that the dress (which I bought at a second-hand shop) is actually home-made, based on a lot of the stitching, and did come apart in one place, which is why it was in the second-hand shop. A dart that should go all the way to the bottom only goes to the waist. It's not horribly noticeable, but I would like to fix it before the next time I wear it (whenever that is).

Overall, Fanime was fun, I was only stopped for photos a ton as Clyde with Pac-Man, so it was a really relaxing weekend, and my only really uncomfortable costume was Franziska, which I only wore for a day.
at 10:33 PM
Email ThisBlogThis!Share to TwitterShare to FacebookShare to Pinterest