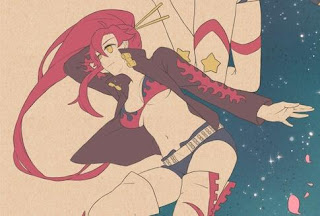 So! A little while back, I was asked to join a Tengan Toppa Gurren Lagann cosplay group for Kin-Yoobi Con's cosplay contest, and even though I can't compete (because I staff and emcee the contest), I decided to join the group, agreeing that, even if I couldn't wear it, I would finish the cosplay by Kin-Yoobi. In the past, I have been asked to cosplay Yoko, but I never had a real reason too, having never seen Gurren Lagann and not even having a group, so now that I was with a group, I decided to cosplay her. Originally, I had planned to cosplay her first, most recognizable outfit, because, well, it was the most recognizable, but after doing a little more research, I decided to cosplay what I have come to know as "Bounty Hunter Yoko" (shown above). I chose this outfit because it looks extremely similar to her original outfit, but is more covered-up, so that hopefully I won't run into issues with convention staff. If I do run into issues with staff, I have a backup plan (in Ep. 5, she wears a robe that completely covers her body, and I find it amusing).

I began researching materials and reference pictures as soon as I had chosen an outfit, as well as started actually watching TTGL. I haven't watched a new anime in a long time (since Panty & Stocking with Garterbelt finished), and of course I find myself completely in love with the series. Now, I'm not sure if this was because I was already slated to cosplay her, but I also find myself completely in love with Yoko. The moment she sat on Kamina's head for saying she had a big butt, I knew I loved her. I might not love her so much if I wasn't going to already cosplayer her, but I'd like to think that things just worked out really well in that regard, and that I would have loved her and cosplayed her anyway.

My first worry about the costume was the materials. With a ridiculously wide variety of materials to choose from, I've seen Yoko cosplayers use everything imaginable, and sometimes, http://www.blogger.com/img/blank.gifwell, it just doesn't work out. The bikini top is an easy one, bikini fabric. I was fortunate enough to find that JoAnn's sells dance/swim knit fabric. Originally, I was going to buy a bikini top and alter it, but you'd be surprised how hard it is to find a plain, black bikini in the right style. I was also surprised to see how easy it seems to be to make your own bikini. The tutorials on YouTube seem so simple, however, they all forget to put any kind of padding in, and a majority of them, they use t-shirts as material.
Wet t-shirt contest anyone?
In the defense of the video creators, their intent may have been to make bikinis for tanning/showing-off purposes only, but I have yet to come across a video that either says this or puts pads in. Regardless of that, though, most of the tutorials that I have seen are very good and easy to follow.

The next material issue that I had to tackle was the flames on the bikini. Originally, I thought I'd use bikini fabric and hand-sew it on, but then I didn't like the thought of all those stitches and the edges of the fabric showing, so I started researching more about applique materials and techniques. I frequently use Heat 'n' Bond for adding details, mostly ribbon detailing on projects such as Franziska, but the http://www.blogger.com/img/blank.gifkind I use gets very stiff when it's dry, so I wanted to see if there were more options. I was browsing the "bonding & stabilizers" category of JoAnn.com, when I came across iron-on vinyl, which led me to do a Google search which took me here then led me on a fantastical journey of knowledge.

Eventually, I ended up on Specialty-Graphics.com reading about Siser EasyWeed Stretch Vinyl, a thin, soft transfer material commonly used on sports uniforms. It can be applied to "Cotton, Polyester, Poly/Cotton Blends, Spandex, and Lycra", and seems generally easy to work with. At the moment, this is looking like my best option, but it just sounds too good to be true. Also, according to JoAnn.com, the dance/swim fabric isn't supposed to be ironed. So I'm eyeballing this, but also looking for other possibilities.

Another important part of the costume, for me at least, it the shorts. I intend to cosplay several versions of Yoko, and it seems like a lot of them use the same shorts, so I want them to look good. I've never been impressed with any Yoko shorts that I've ever seen. Granted, I have not seen many Yoko shorts, so maybe I just have to look harder. I've seen Yoko's shorts made out of vinyl or pleather, and I can see exactly why cosplayers would choose that material based on the artwork, but I just flat-out do not want to work with or wear pleather or vinyl. Ideally, I'd like leather shorts, but not only are they hard to find and expensive, I'm actually generally opposed to leather, and I'm not sure how ready I am to push my morals on this. 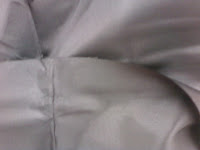 On an outing to JoAnn's, I browsed the fabric looking mainly for what fabric to use, not eliminating any possibilities until I had fully checked them out. Even though I know how taboo is is for cosplayers to use it, I was drawn toward the satin, and even though I knew I didn't want to use it, I will admit to looking at it. Located right next to it was a satin blend, which caught my attention and is shown left. I know it's hard to tell, but the top half of the image is the "right/correct" side of the fabric, and the bottom part of the picture is the "wrong" side of the fabric. Believe it or not, heh, the "wrong" side of the fabric is less shiny, but that picture was taken under JoAnn's bright fluorescent lights (no flash). At the moment, this is the fabric this is the fabric I'm considering. However, since I keep feeling like I have to defend it (it's not that shiny, it's bad lighting, it's darker in person), I'm still looking for something better. So we'll see.

I'm not even going to get into the jacket and boots right now, since I'm completely lost as to what material to make the jacket out of (I'm not even 100% sure what color it is), and the boots are seriously a whole post on their own. I have some vague ideas for the boots, but nothing concrete, so I'll just hold off on posting about them until I get more ideas.
at 11:46 PM
Email ThisBlogThis!Share to TwitterShare to FacebookShare to Pinterest