My bobbins have been attacking me. Somehow, the string from a bobbin will get wrapped around my foot or leg and start coming off of the bobbin as I walk away, and at a certain point, the bobbin will fly off of the holder at me. I guess this wouldn't happen if I kept the sewing cabinet closed.

Angry bobbins aside, I made some sort of cosplay progress today. I started by working on my Yoko boots. The first time I wore them, the boots inside of them (that I covered) didn't have laces in them because I thought that the laces would give the boot cover an awkward shape. What happened instead was that the boots were too loose, which not only gave the covers an odd shape, but also gave me blisters. So I decided to re-lace them today. It was difficult because I can't take the boot covers off (they're glued on). I got one laced, but when I went to do the other, I noticed that part of it was tearing, and trying to put the laces in made it tear more. I tried stitching it up (this is about where the bobbins attacked), but when I put the needle through the vinyl boot cover, the vinyl started ripping a ton. I stitched it as best as I could, and then put a layer of "vinyl, fabric, and plastic" glue over the stitched and around the edges of the tear.

This was my second time using this glue, the first time being when I needed to repair my Yoko jacket (the iron-on vinyl was coming off and just wouldn't stay on). When I used it on the jacket, I didn't use a brush or anything to put it on, I used a scrap piece of cardboard, haha. This time, I used a paint brush. In hindsight, I should have dug around for a cheap Crayola brush, because that would have worked just fine. Instead I used a nice paintbrush and almost ruined it. Thankfully, you can wash 'vinyl, fabric, & plastic' glue out of a paintbrush with warm water and mild soap. Whatever is left on the brush after washing it can be combed out with a very thin comb.

Because of how bad the tear in the boot was already getting, I decided to let the glue on the boots dry completely before messing with them any more, leaving one of them unlaced. Instead, I chose to work on Yoko's belt. A while back, I bought square studs to make the belt, and I'm using leftover fabric from the boots so that the belt matches them. I put on my shorts and measured around where I wanted the belt to sit. It sits in an odd spot on me because it has to cover a seam, so it's not really straight across my hips. I cut the fabric an inch longer just to be safe, and four and a half inches wide. I folded it in half inside-out the "long way" and sewed it together. I turned it right-side out, which was ridiculously difficult. About a quarter of the way through, my fingers started cramping, but I pushed through it. 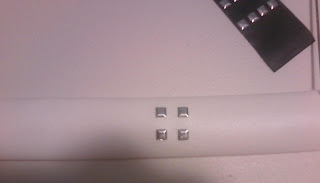 Once it was completely right-side out, I laid it flat with the seam in the middle and ironed it. This was yet another near-impossible task. Vinyl doesn't iron, it melts, even with protective silicone paper. Luckily, since this was to be the back of the belt and the part that would go against the shorts, it didn't matter what it looked like. The front of the belt managed to stay un-melted and looks good. I couldn't get the fabric completely flat, but it's pretty flat anyway. I'm thinking that when I put it through belt loops and around my waist, it'll flatten out more.

The studs that I got are supposed to be iron-on, but I pretty much already knew that ironing them on wasn't going to work, which was the reason I bought the special glue in the first place. I tried ironing them on anyway, but I couldn't get them to stay in place under the silicone sheet. So began the tedious task of gluing every stud on individually. To apply a stud, I'd peel it off of the plastic it sticks to, hold it between my fingers, turn it upside-down, squeeze glue onto the back of it straight from the tube, and then spread the glue with the end of my elastic threader. I'd wipe the extra glue from the elastic threader onto the palm of my hand, which I later learned was a very bad idea. 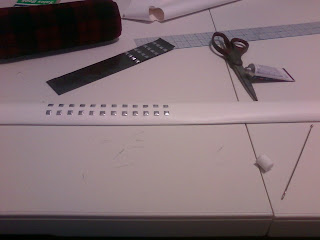 The bottle of glue reads "Avoid contact with eyes and prolonged contact with skin." Of course, I didn't see that until later, after my palm started burning. So after carefully placing twenty-four studs, I had to stop. I have sixteen more studs left, but I think that covering the whole belt is going to take around 100. It might take a little less, but either way, I need at least one more package of studs. I'm thinking I'll buy those along with some silver pleather for the buckle and finish tomorrow.
at 9:49 PM
Email ThisBlogThis!Share to TwitterShare to FacebookShare to Pinterest