Today was pretty much exhausting. First I fixed Christmas Chi's ears. I'm surprisingly happy with the way they turned out too! That was pretty much the only easy part of today.

I then planned out how much fake fur I was going to need. I decided on a width of 11/2 inches, and measured around the bottom of the skirt, the bottom of the capelet, and the neck of the capelet. At this point, I also thought I was going to be making a hat, so I factored that in, but later scrapped it. I figured out that I didn't have enough fur to cover all of this, so I pulled apart one of Amaterasu's legs. Unfortunately, the leg fur was different than the fur on the shorts was, but I don't think it's too noticeable.

I made a quick Santa hat and then began adding fur to it. However, the fur didn't really behave the way I expected it to, and instead of wasting potentially hours working on something that probably wouldn't work anyway, I set it aside. I tried to figure out a way that I could use all of the same type of fur on everything, but it didn't work, so I decided on the thicker, heavier fur for around the neck, so that it wouldn't weigh down the skirt or mess with the shape of the capelet.

I cut the fur into strips and pinned them to the bottom of the skirt, a feat in and of itself, then began sewing. Originally, I wanted to use a zig-zag stitch, my favorite stitch, because I don't like the edges of fabric sticking up. My machine had a different idea though, and instead decided to try to eat the fur. It also only stitched half of the zig-zag stitches, which just gave me a straight stitch with a ton of tangled string underneath. I tried several times, but I couldn't get the zig-zag to work, even though it worked perfectly on scrap fabric, so I gave up and used a straight stitch. 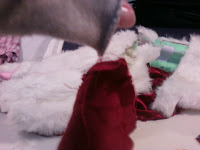 After that, it sewed almost perfectly, with only one or two hiccups along the way, mostly at the beginning. That is, until the end. I've been wearing fingerless gloves almost 24/7 because I get cold extremely easily, but I dislike regular gloves because they don't let me use my fingers. In the last three or so stitches, somehow the edge of my glove got pulled under the sewing machine foot, and I sewed two stitches through it. This is the closest I've ever been to running my finger over with the sewing machine, and I hope it's the closest I'll ever get.

I cut myself loose, finished the last few stitches, and moved on to the capelet. I put the trim on the bottom of the capelet first, and that went pretty well. I decided that I was going to line the inside of the neck piece though, since the underside of the fur is very scratchy. I took the cheap way out of all of this though. First, I used the fur that I had originally wanted to use for the hat, even though it was 2 inches wide instead of 11/2 like the rest. The top of it was hemmed down so that you couldn't see the edge of the fabric above the fur, and I needed a longer piece, so I hemmed anther piece. I wanted the pieces to be of equal length so that the seam would be in the back, so I cut both of them, turns out you can't see the seam at all anyway, so that was pretty much a waste. I cut a 2-inch wide piece of white velvet left over from Amaterasu to fit around the neck of the capelet. I sewed it on so that one inch overlapped the neckline, and one inch stuck up above it. Then I just hot-glued the fur onto the white velvet. Really cheap, but my machine was not going to have any more of that fur.

My boyfriend and I spent some time scouring my house for the black gloves that I used for Franziska von Karma, but we couldn't find them. We looked for my Santa hat too, which we also couldn't find. I had to run off to a GZR meeting after that, during which, I sewed a gold bell onto my black bowtie for this (hard to see in the picture).

When I got back, I hurriedly cut a couple of small pieces of the fur (to be used later) and cleaned up the sewing room because my grandma is staying with us and sleeping in that room. I also wasted a few minutes styling the bangs of my wig. While the styling actually turned out way better than I thought it would, I later realized that the bangs were going to be squished under a hat anyway. Then I suddenly realized that my Santa hat was most likely in the shed with the rest of our Christmas stuff. I took a flashlight and began digging through the shed. The first box that I could get to was all wrapping paper, so I set it aside, the second box was our (fake) Christmas tree, I set it aside too. Then began the actual digging. I moved and looked through nine large, heavy plastic bins and found nothing. Well, I found some weird knitted red and green hats, but not my Santa hat.

As I started to put things back, I figured I'd look in all of the boxes again, just to be sure I hadn't missed it, because I knew I packed it up last year after Christmas. It wasn't in any of the nine bins, so desperate, I thought, Well, it wouldn't hurt to look in the box with the tree... I opened the box, moved over the tree skirt, and there was my hat. It was in the second box I had my hands on the whole time, and I wasted all of that energy. I wrestled the last two boxes back into place and went inside.

I started to put on all of my completed pieces, but then I had a strong urge to look one last time for my black gloves. I opened up my closet and looked at the plastic drawers I keep some of my cosplay stuff in. I had already checked the drawer where I keep my gloves, but in the drawer above it, I could see my Lady Mario gloves through the plastic. Yup. The black gloves were in there too.

Feeling very pleased with myself, I put on all of the parts of my costume that I had: Two pairs of tights, skirt, belt, petticoat, shorts, tank top, long-sleeve shirt, capelet, wig, ears, hat, gloves, and shoes. Franziska's gloves are just past wrist-length, while the ones I have go to about my mid-forearm, and luckily, I never got around to hemming them, they've just been safety-pinned this entire time. I decided that I liked them better longer with this outfit. I also toyed around with the idea of wearing black fingerless gloves with white lace over my black gloves, but it just didn't look right. After taking a picture, I took off the hat, ears, wig, and capelet to finish styling the wig. 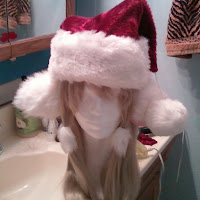 In the reference picture I'm using, Chi has little white puff balls instead of her usual hair spools, which is extremely lucky for me, since I seem to have lost my hair spools. I thought it would look better if I had which puffs with red ribbon around the middle, but it actually looked really horrible, so I stuck with the white puffs by themselves. I'm quite pleased with them. They're glued onto tiny rubber bands, and hopefully they stay there.

I finished changing into my pajamas and began packing a small bag for the gathering. I decided on a small iridescent red/black bag (it's actually a makeup bag, but looks like a purse). I packed a few things, my mini first-aid kit, my camera, which I always freaking forget, and my wallet. I threw a few beauty products in there too, like some lotion and bobby pins. I then suddenly had the urge to organize my makeup some.

My makeup is usually kept in three makeup boxes and all over my bathroom counter, and it's been a mess since before Halloween. I more or less put things back where they should be, though not in a very organized way, and then laid out the makeup that I use when I cosplay. I realized, wow, I put a lot of makeup on when I cosplay. I don't think it really looks like that much though, not unless I intend it to anyway. I don't wear nearly this much on a daily basis though. For everyday wear, I only use eyeliner, under-eye concealer, and occasionally acne concealer if I've got a really bad pimple or two. Also, I think about half of that is brushes, maybe a little less than half. Some day soon, I'm going to do a video about how I do my makeup for cosplay.

So tomorrow, I'm off to the Bay Area Conventions gathering at the Exploratorium!
at 1:06 AM
Email ThisBlogThis!Share to TwitterShare to FacebookShare to Pinterest