Frozen and Snowflakes and Glitter and Stuff!

Oops, I haven't posted since February~ Ah well, it happens. SO! I've been working on a cosplay of Elsa from "Frozen"! I'll be making her ice dress because, well, it's pretty. Like really pretty, it's all sparkly and stuff. Plus, pretty much every other dress had embroidery on it, and I just didn't feel like doing embroidery after I did all that beading on my Ho-Oh cosplay.

I'm trying to make this cosplay using only the money that I won at AoD, and I think so far, I've been doing pretty good. I had a problem with buying way too many sequins for a while, but I think I finally settled on which ones I'm going to use. I'm also re-using a wig that I already had.

I had to restore the wig, since it's old and was in such bad shape. It was very time-consuming, but so worth it. I'll be doing it on a couple of my other wigs, and I'll take photos and post a step-by-step of what all I did, but really it's all stuff that you can find online. I also have to re-style the wig because I braided it too loosely, but it really wasn't hard at all. I've been able to do a French braid since I was in Jr. High, and I've been able to do an inverted braid for about as long, so all I had to do was combine them. Since I have to restyle it, I'll do a tutorial too, since a lot of people seem to be having trouble with Elsa's hair. I haven't decided if I'll add extra wefts for thickness, since the wefts I have are too dark (I might be able to hide them though), and I'm being a cheapskate.


As I mentioned, I had/have a sequin/rhinestone/glitter problem:
For the shoes, I'm being extra lazy and uncreative. I bought nude pumps and am gluing snowflake-shaped fabric to the toe and heel. It's not perfect, but hey, it works. (It's not completely glued down in these photos, I had to but different glue.) 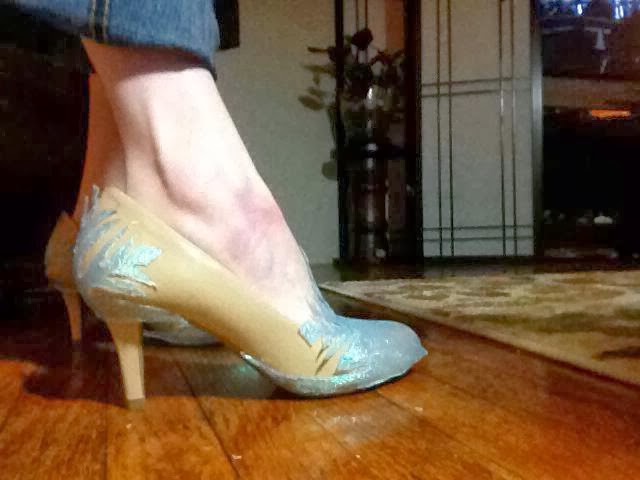 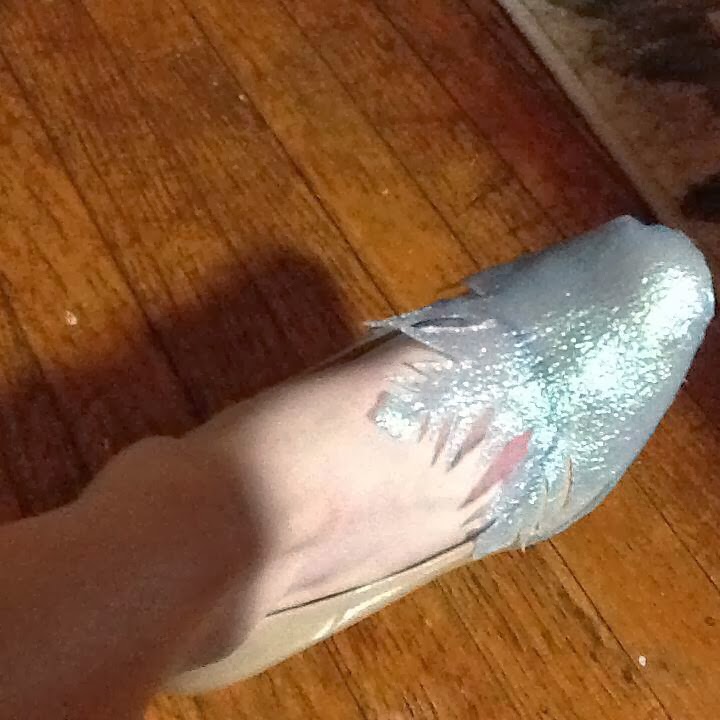 For the dress, I'm essentially making three separate pieces to get the right shapes I want, and then I'm sewing them together to get the smoothness and flow that I want. This was my first time making a corset, so I made a mock-up first, which went surprisingly well. The corset will having boning in it, but I'm saving it for close to last because I don't want to have to work around the boning when I put everything together.

I made the sheer top part, but I kind of wasted three hours on it and it can't be used, so I had to scrap it. I'll be trying again with a different fabric. Since I couldn't get new fabric right away, I started working on the cape, which is both the most fun and the most tedious so far. I started out by shaping and hemming the bottom. Since the fabric I'm using is mesh, I put a strip of scrap fabric between the fabric and the hem so the thread could catch it better and it wouldn't get torn up.

For the snowflakes on the cape, I'm using a very fine, white glitter and a backing of the same fabric I used on my shoes. I started out by tracing the cape (well, half of it), and drawing all the snowflakes I wanted on it. There are some extra in the photo because I messed up drawing a couple of them. In total, there will be six small snowflakes, one large one, and a half-snowflake at the top. I haven't decided if I'm going to do snowflakes down the sides as well, partially because I just noticed them about twenty minutes ago, and partially because I don't know if I have enough time/materials. I'll just do all of the other ones first and then see where I'm at.

After I had my patterns done, I rough-cut a piece of my backing fabric (which I messed up doing, but I'll recover), and set it behind my cape fabric, on top of the pattern. Since both the cape and the backing are very sheer, I can see straight through them to the pattern. Then I used a paint brush to dab fabric glue inside the lines of the pattern and cover it with glitter. I used a dry, flat brush to push the glitter around and make sure everything was covered. I'm going to have to take the whole thing outside and shake the loose glitter free when it's all dried, and I'm not looking forward to it. There's already glitter everywhere, and showering does not get rid of it! After it's dried and shaken off, I'll cut the backing fabric to the shape of the snowflakes so only the snowflakes will be thicker than the rest and will stand out more! I've only done half of the top part so far, but it's pretty much turning out exactly like I expected, and that's pretty exciting!
Pretty much every step of this cosplay is extremely time-consuming, and I've been procrastinating, only working a few hours on it every day, and I want to wear it this weekend! Oops! Better get to work on it!

at 8:04 AM
Email ThisBlogThis!Share to TwitterShare to FacebookShare to Pinterest