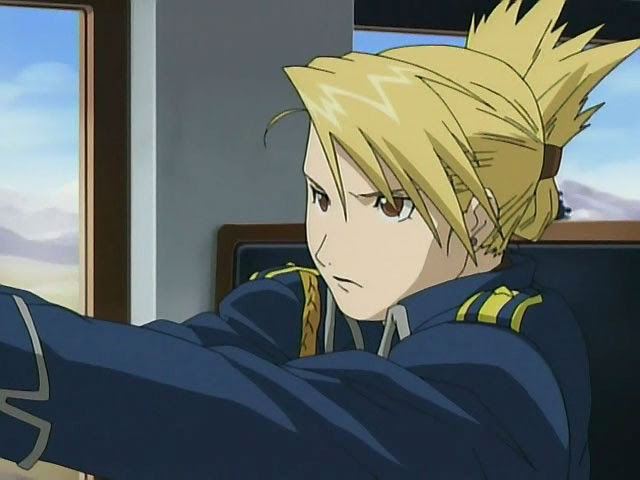 Brief Bio: Riza Hawkeye is a first Lieutenant of the army of Amestris and serves under Lieutenant Colonel Roy Mustang. She's very skilled with firearms, and keeps up a tough facade, rarely showing any emotions other than anger or annoyance, though she is very compassionate on the inside. She is very protective over Roy Mustang and would follow him to the ends of the earth and back if it was his wish. For a full biography, check out Riza Hawkeye's FMA Wikipedia page.

Why?: I absolutely Love Riza Hawkeye. I think it's just her overall personality, she's independent and dependent at the same time, but still strong enough to take care of herself at the same time. As for the outfit itself, I've always had a liking for military uniforms for some reason, so it totally works for me.

Construction: I consider this my first real cosplay for some reason, even though Tohru was technically my first. My mom helped with a lot of this too, but I did a lot of detailing, and things that didn't involve the sewing machine.

The jacket was bought from a thrift store and modified with fabric bought at JoAnn's (added collar, cuffs, and closing flap), the skirt and pants came with it, and the skirt was cut to fit. The silver trim and yellow shoulder stripes are ribbon from JoAnn's held on with Heat 'n' Bond, and the buttons are hand-sewn on. I already owned the combat boots.

In the pictures here, everything looks a lot darker than it is (bad camera quality), but the main reason I made this costume instead of buying one is that I didn't feel that the store-made costumes were a dark enough blue. My Riza is actually a proper navy blue.

Originally, I used my real hair for this cosplay, though you can't tell in the pictures here, my hair actually was blonde. However, I ended up cutting my hair and dying to black, so Riza went into temporary retirement. Now I have a blonde wig, so I'm hoping to un-retire her at a con soon-ish.

This costume is 95% complete.
The missing 5(ish) percent is the silver nameplates on the collar, the star buttons / pins on the shoulders, and a handgun.

Convention Info: I first wore this costume at Comic Arts & Anime Teen Expo (CAAT) '06. Since then it has been worn to various small conventions as well as both Fanime and Kin-Yoobi '08. It has never been entered in competition. As mentioned before, it has been temporarily retired since '08, but I hope to un-retire Riza some time in '10.
at 11:32 PM
Email ThisBlogThis!Share to TwitterShare to FacebookShare to Pinterest