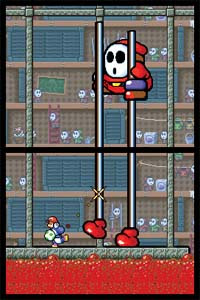 I'm sick. Again. With what feels like the same thing I was sick with last time I was sick. Typical cold-flu thing. Hopefully I can shake it in a couple days like I did last time, 'cause that was pretty cool. In the mean time, I probably won't be working on anything much.

My boyfriend and I are discussing switching his Boo cosplay out for something else. We're trying to figure out how to make him into a Shy Guy on stilts from Yoshi's Island. That really makes me want to be a Yoshi though, haha. At least that would give me something to work on.

Also, I may re-visit my Pikachu costume, since I didn't take it seriously the first time. I probably still won't take it that seriously, but I'll spiff it up if Sheik and her group are doing a Pokemon group at the SF Cherry Blossom Festivale, which she says won't be very likely =/ Or if one of my cosplay group members will go as Ash, that'd be a good reason to bring Pikachu too.
at 9:59 PM
Email ThisBlogThis!Share to TwitterShare to FacebookShare to Pinterest