Almost every pattern gives you pieces to make multiple things. The pattern used in this example can be used to make three different styles of a summer dress. This means that you're not going to use every single pattern piece enclosed.

Some pattern instruction manuals will have a page that shows you exactly which pieces you need for each design. It looks something like this: 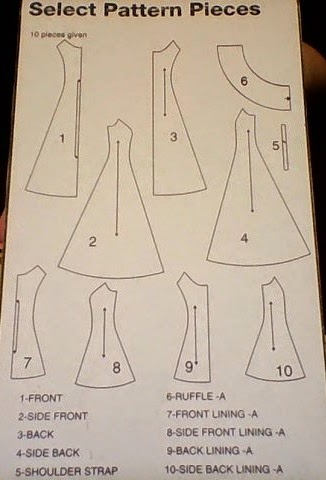 In the above example, you need the front, side front, back, side back, and shoulder strap for all of the dresses, and you can tell this because there's no style letter specified next to them in the list. On the other hand, you only need the ruffle and the linings for dress style A, and that's shown by the letter "A" written next to each one on the list.

Here's another example of how it may be shown: 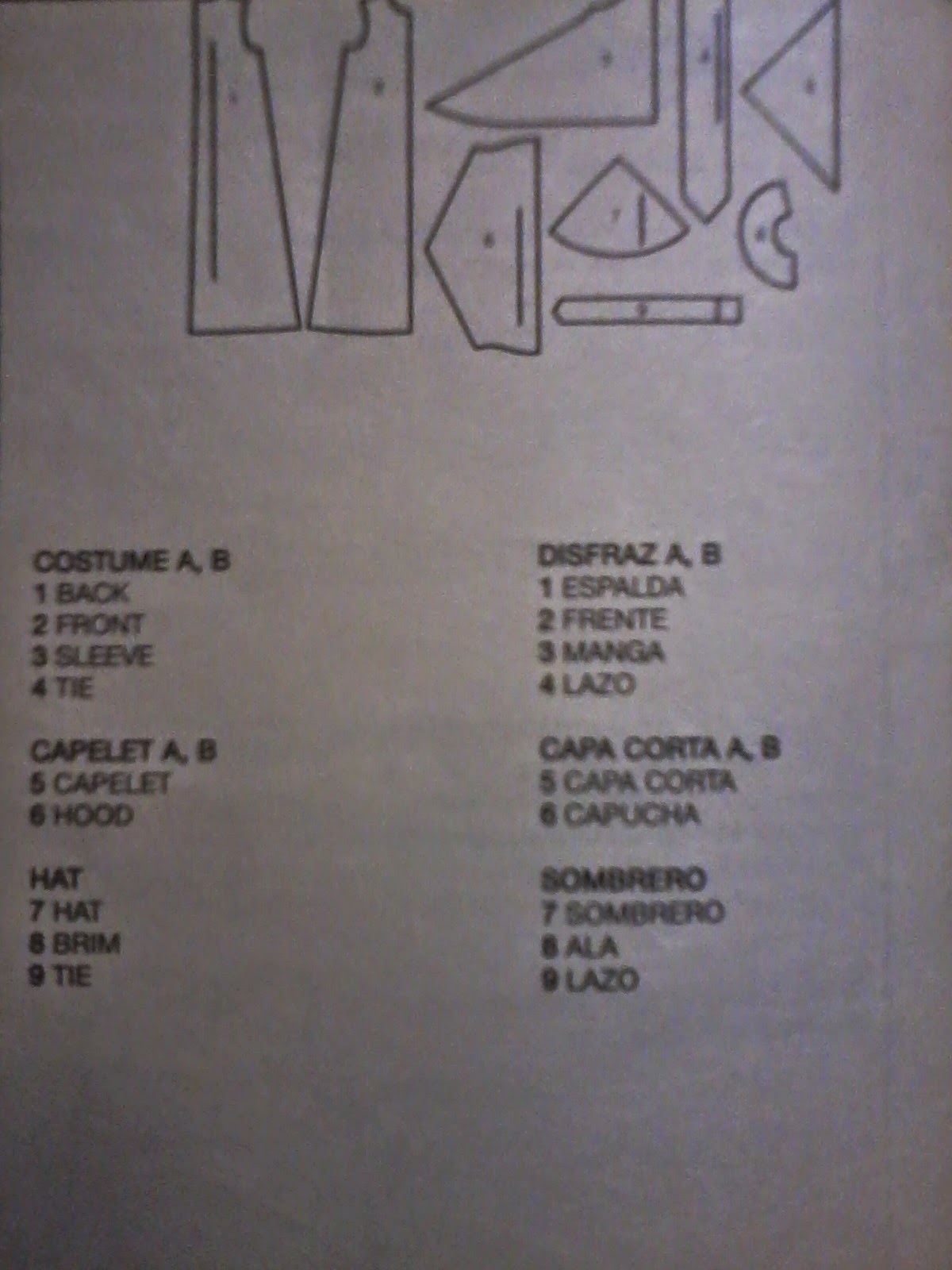 This pattern is for a wizard costume, and is a little more complicated, but it's also laid out a bit easier. The costume piece that you can make is in bold, and then the pattern pieces you need to make it are listed below. (The list on the right is a Spanish translation.)

Another way you can tell what pieces you need is by checking farther into the instructions, near where they start talking about how to lay out the pattern pieces to cut them out of your fabric. 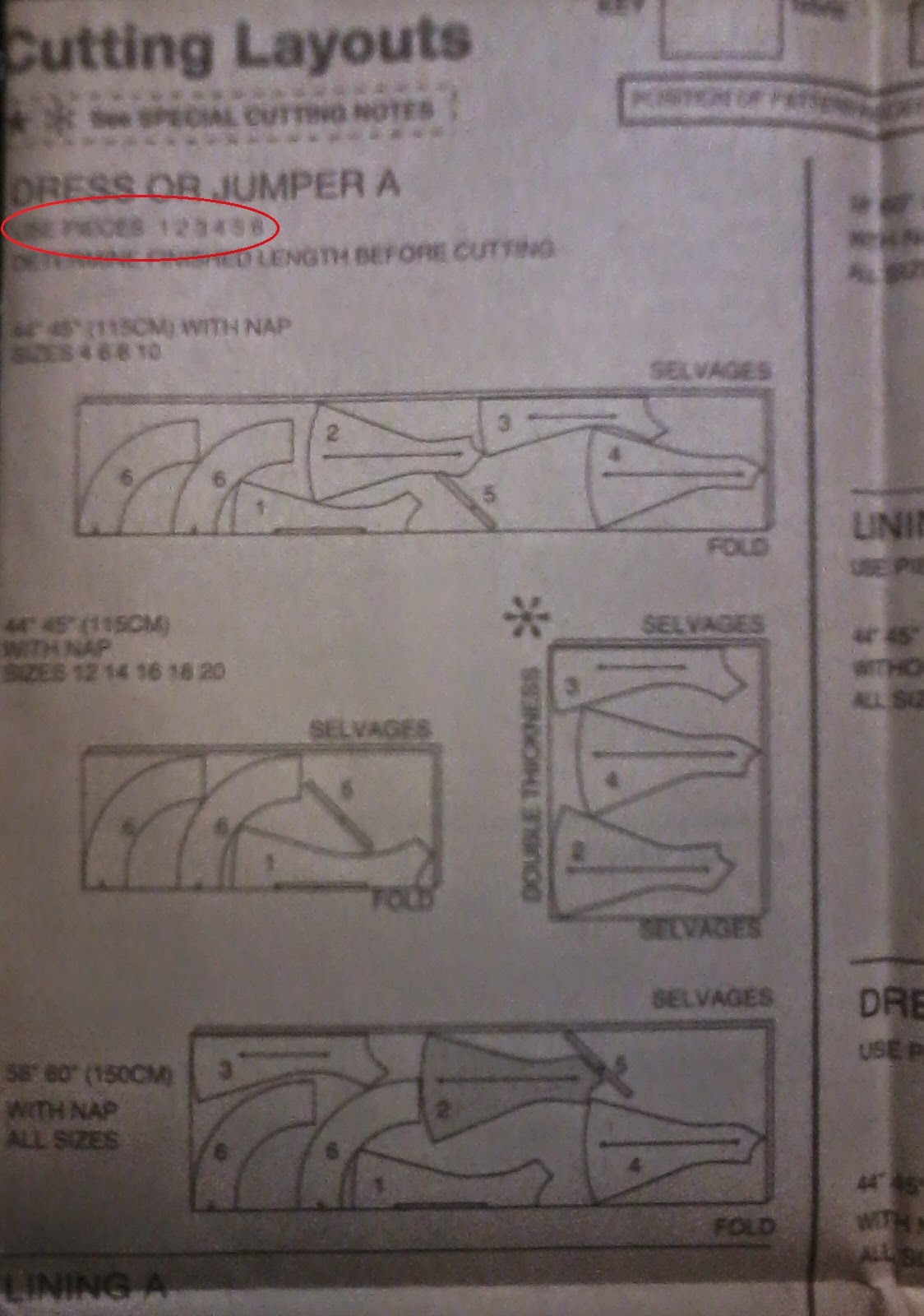 (I apologize for the blurriness, but I'll explain.) It specifies which dress style you'll be making, and then directly underneath says, "USE PIECES 1, 2, 3, 4, 5, 6". It should be noted that this does not include the lining, and the lining pieces are farther down the page. (You can see where it says "LINING A" at the bottom of the photo.)

If all of that is too cluttered-looking, or if the instruction booklet isn't laid out either of those ways for some reason, you can usually tell which pieces you need by looking at the pieces themselves. The following is from a Burda sweater pattern: 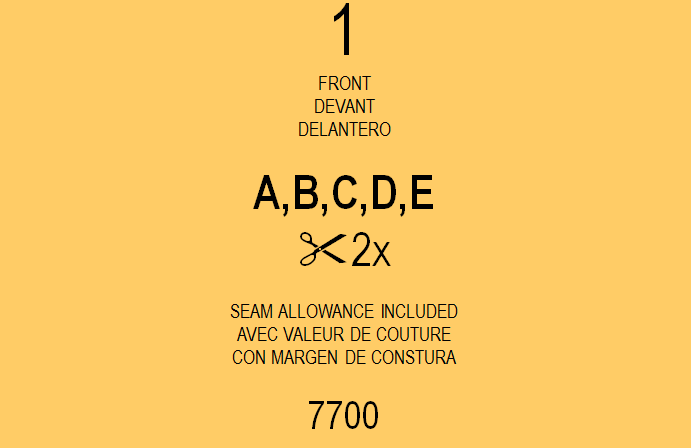 At the top is the piece number, followed by what piece it is. The letters below describe what style of sweater it can be used for. This piece can be used for sweater styles A, B, C, D, and E (all of which would be found on the front of the pattern packaging). This pattern piece also instructs the user to cut two pieces of it (usually mirrored pieces, further instructions for that would be found in the instruction booklet that comes with the pattern). There is a note that seam allowance is included, and then the pattern number.

Here are some common symbols and vocabulary used in/on patterns.

(This is the most difficult of the vocabulary to understand, so forgive me if this section is a little long.) The grain line is a (usually vertical) line with an arrow at each end (shown left). The selvage or "selvage edge" as it's sometimes called is the side of the fabric, as opposed to being the top or the bottom. On a bolt of fabric or a cut of fabric, the selvage edges are sometimes treated so that they won't fray, and they'll look different from the rest of the fabric in some way.

So how do you tell which way is which? The easiest way is to watch the fabric being woven, but the second-easiest is to see it on the bolt before you buy it. Here I have a beautifully rendered MS Paint version of a bolt of fabric with everything marked: 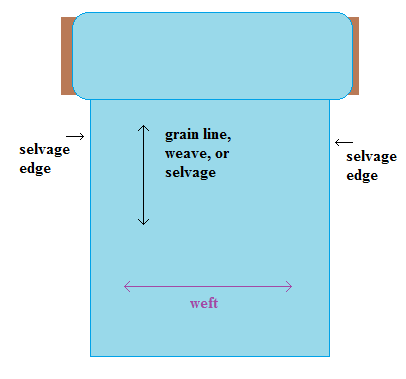 The grain line on the sewing pattern lines up with the weave or the selvage. On the pattern piece, it usually looks like this (this is pattern piece number 3 of the dress pattern that I referenced earlier): 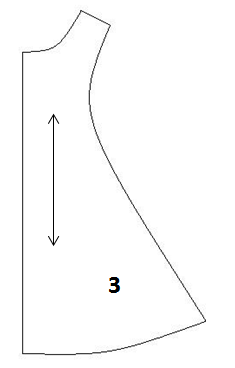 Place of Fold - "Place the arrows facing the fold of fabric" 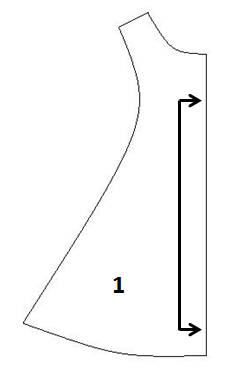 Notches are represented with triangles, and you cut them out of your fabric. They're seen on curves such as armholes and waists. This is so that when you either hem or line your garment, the fabric won't bunch up on the curve.

Circles, diamonds, and sometimes other shapes, such as triangles or squares, are used to line up the pieces of your pattern that are meant to be sewn together. Sometimes the shapes will have numbers next to them, and you would for example line Circle 4 up with Circle 4, and Circle 2 lines up with Circle 2. Other times, there will be multiples of the same shape, so you would line up a row of three diamonds with another row of three diamonds, etc.

Cutting Line - "Cut on this line to cut out your pattern"
Cutting lines can be solid or dotted, but are most often solid. If a pattern comes in multiple sizes, you can find the sizes written next to the cutting lines, and you would cut on the line that matches the size that you need.

Some patterns have more intricate instructions on lengthening or shortening garments, so always try to double-check.

Dotted Lines - Usually the lines you sew on.
Examples:
- Sometimes the cutting lines

Darts that show seam allowances are usually marked as "seam allowance", and darts are characterised by their triangular shape. If a dotted line is intended to be cut on, you will find the size number next to it, and it will sometimes have a pair of scissors printed on or near it.