So for the first time in a year, I attended a NorCal gathering! I was really, really nervous about going, to the point that several times, I almost changed my mind and didn't go at all, because it was my first time going to a gathering by myself. I mean, a lot of my friends were there, and I knew that, but this was the first time that I arrived alone and didn't make any real plans to hang out with anyone. I didn't even coordinate cosplays with anyone, I just went on my own, and for some reason, it was terrifying. I was so scared that I'd just be ridiculously awkward and end up sitting by myself for most of the time. Luckily, I was so, so wrong.

I had so much fun hanging out and chatting with everyone that I could and hopping around from friend group to friend group. I almost wished I had group-hopped more because I didn't even get to spend time with everyone I knew. Ah well, next time!

I finally got to wear my Animal Crossing cosplay, or at least what's done of it. I was sewing like mad to fill Etsy orders in the weeks leading up to the gathering, so I didn't get to work on any personal stuff. Technically, all that I had to finish for my cosplay was the hat and the shoes, but that hat just didn't get done. I managed to paint the shoes with what felt like a billion coats of paint, but the top coat/sealant made them crack. I tested out the flexibility of the paint after each layer, and there was zero cracking, but after I wore them for less than half an hour after putting the top coat on, they cracked instantly. Guess I have to figure something else out. Since it's the holiday season, I substituted a Santa hat for my missing one.

Originally, I had planned to wear a short blue wig that I've had forever and rarely used, but with the Santa hat, I felt like that would have been too many clashing colors, so I swapped it for a wig that I bought from Epic Cosplay recently. The wig is technically for my Sarah (Last of Us) cosplay, and I still need to dye and style it, but it was a good stand-in in the mean time.


- Gold Rose Cosplay
at 12:48 AM No comments: Links to this post
Email ThisBlogThis!Share to TwitterShare to FacebookShare to Pinterest

So I finally got it together and decided to order a wig for my Koffing cosplay, since I've had the costume for I think almost two years now and have only been able to wear it twice because of my lack of wig. (Once I used my friend's wig, and the other time I used my natural hair, which looked horrible.)

So I bought this purple wig 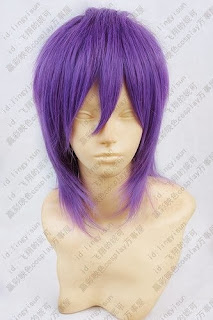 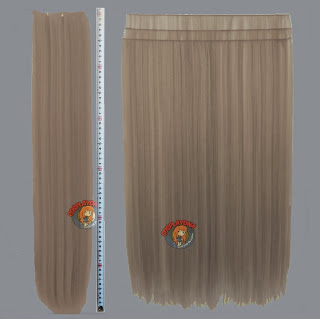 The hair extensions already came in the mail, and they're so much nicer than I expected! They're sold by CosplayDNA on eBay, and they're super soft and also heat-resistant. I bought two sets just to be sure I had enough, and they're only five bucks each with free shipping. I plan to curl them and attach them to the bottom of the purple wig to mimic Koffing's gas clouds. (This was actually my boyfriend's idea!)

There's mixed reviews about the seller that I bought the wig from, a vast majority are good reviews, but I always check negative reviews just in case. Negative reviews usually give more detail than positive or neutral ones, so I always feel like it's good to check them, no matter how few there are. Anyway, the biggest complaint among them was that the wig received was not the right cut or style, so I'm prepared to have to style it some.

I'll do another post when the wig arrives in the mail (any day now) so can decide whether or not I live it before I link to the seller.
at 10:51 PM No comments: Links to this post
Email ThisBlogThis!Share to TwitterShare to FacebookShare to Pinterest
Newer Posts Older Posts Home
Subscribe to: Posts (Atom)