Oh, man, I don't even know where to start with this one. We left way later than I wanted to, due to a lot of things really. Then we hit some of the worst traffic I've ever seen, and then we got lost. So we ended up not making it to the convention until about 5:30.

We met up with my cousin and her friends, whom I sold stuff too, and my cousin gave me gifts =] We then ended up in the tabletop gaming room where (hahaha) my friend got hit on by some random guy. It was hard to watch, but still so hilarious. Poor girl D= 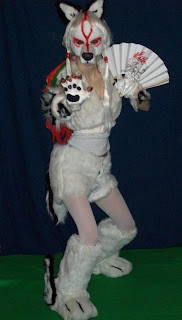 Then I went to sign in for the costume contest (as Amaterasu), which I thought was at 6, but was actually at 5! Oops. I still got to participate though, they just had to do my judging later.

We wantered for a while, and I ran into Foxberry in her completely awesome Dr. Franken Stein (Soul Eater) costume, which I won't link directly to because I'm not sure she wants her picture all over the interwebs. I know I wouldn't mind, but I'm weird like that. We talked a bit, in-between being asked for pictures and whatnot.

Then my group went for food and Foxberry and I went to the masquerade pre-gathering organization thing to ger seated and receive info on how things would be run. It was... A little chaotic in there. Loud. very loud. But they got the job done. I had to be pre-judged, and, oh my goodness, stress! I don't know why, but I completely froze up when they asked me questions. "How did you make this piece?" "I.. Umm.. I... Made it..? *dies*"

The masquerade itself went fairly smoothly. There were a few audio malfunctions, and one group ended up knocking the mic stand (with microphone still in it) completely off the stage. Heh. That was also hilarious and painful to watch. I got the worst headache ever during the "halftime show." I think it was a combination of my tight wig cap, my mask pressing against my forehead uncomfortably, my fangs not allowing my to relax my jaw completely, and bad jokes on the Emcee's part. Okay, the jokes weren't bad at all, I would've rather enjoyed them if it weren't for the immense pain. 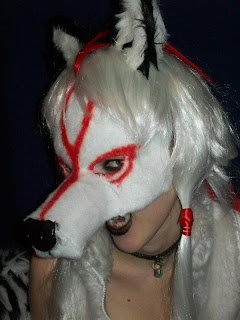 I ended up winning runner-up for construction, which I"m a little butthurt about, but I'll get over it. I'm sure that the guy who won best for construction deserved it. I believe those judges were very fair. Foxberry got a Judge Favorite award because of her awesome clicking screw-bolt-thing (I don't know what it technically is, but it's awesome! D=). We went to collect our prizes and get more pictures taken of us.

And then Shiek found me! I had been looking for her as Ayame all day, but it turned out that she had changed into something else. I was looking forward to seeing that too =/ That's what I get for being so late, I suppose (though parts of that were beyond my control). By the time she found me, I had taken apart my costume because my fangs, wig cap, and mask were killing me, and I was starting to get hot flashes and the fur didn't help.

After that, I bolted to the swap meet where a friend of mine bought a game she's been wanting for hecka cheap. A couple of things caught my eye, but I resisted the urge to buy useless things. I wanted to keep my money. I brought $30 to the con and ended up leaving with $100 xD That part was totally awesome. Usually cons completely drain my money, so this was a nice change. Though I remember profiting from Kin-Yoobi too when they gave us cash as a costume contest prize.

I might go back to AOD next year, in a simpler, easier-to-wear costume, and at a decent time (not 5:00 o.o). I think AOD's main downside is that there's nothing to do and not enough space to do it in. I liked the venue last year more, the "Main Hall" was a very large open area where people could just chill. But this year, there were actually chairs and tables, so that's always nice too. I guess it's sort of a trade-off.

Quote of the Day:

Random Guy: You're not making any sense!
Random Girl: Your face doesn't make sense!
Me & My Friends: Ohhhhhhh!
My Friend: Are you gonna take that?
Random Guy: Who the hell are these people!?
*my group walks away*
at 1:28 AM
Email ThisBlogThis!Share to TwitterShare to FacebookShare to Pinterest