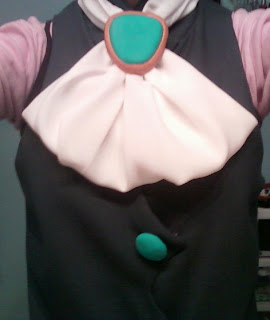 My new neck ruffles for Franziska von Karma are finished! Well, until I decide that I want to remake them again, which I might. No matter how hard I tried, I could not get any of the fabric that I tried to mimic the exact shape that Franziska's ruffles are. I just plain don't know how to do that. Suggestions would be lovely.

All of that being said, I think that I like my new ruffle better than my old one. I just like the material better, really (as much of a pain as it is to work with..). It's lighter and just looks more elegant, though, yeah, in the picture, it looks almost exactly the same as the old one. But I swear it's different!

I probably do need to mess with it some more to get the pleats to stay so that they'll have depth on-camera instead of being all flat.
at 11:26 PM
Email ThisBlogThis!Share to TwitterShare to FacebookShare to Pinterest